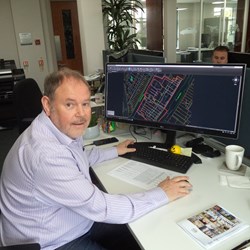 Having just celebrated his 25th anniversary at Shanly Homes, Jon Day, the company's Head of Architectural Services, is reflecting on his time at the firm. "It's gone very quickly, and I'm proud to be a part of the company's growth."

Since Jon started working at the Shanly Group in 1994, the company has more than quadrupled in size. Now 200 people strong, he says that some good things about working at the company haven't changed despite its growth and continued success. "It still has that family feel to the business, and there's a good atmosphere. All of the teams work well together; we work hard and have fun," he says.

This year, the Shanly Group is celebrating its 50th anniversary and throughout half of this time Jon has played a leading role in the business, overseeing the design and delivery of thousands of new homes across London and the Home Counties. Some of his favourite sites include Cricketers View, Guildford, comprising twenty-five contemporary one and two-bedroom apartments, a development of four traditional-style luxury family houses at Greatwood Place, White Waltham; St. Anne's Mews, Wimbledon, with eight large family houses and retention of the Victorian Villa and The Townhouse Collection, Battersea, with some ground floor commercial spaces, seven large townhouses and two apartments. Jon says: "It's always really rewarding to hear positive feedback from our customers, and generally, our schemes are really well received."

Have homes changed during your time at Shanly?

"A large proportion of our customers really like traditional architecture, although some of our more contemporary schemes have proved very successful," Jon says. "How we use our homes has changed, and we have definitely seen this reflected in our interior layouts."

Rather than a division of space into separate rooms, the growing popularity of families using living spaces for socialising and entertaining has given rise to the creation of one open space for kitchen, dining and living. Jon comments: "This wouldn't have even been considered 25 years ago, but a growing number of our customers now expect to see open-plan living areas."

"It's not just homes that have changed: the way we design them has evolved, too," he says. When he joined the company 25 years ago, sketches were freehand and planning and technical packages were produced on tracing paper with drawing boards. A large majority of the work is now produced on computers. "Changing and amending drawings used to involve hours of scratching out using a razor blade and then redrawing, but not anymore. You'll see the odd piece of tracing paper around the office, but technology has really transformed the way we work," Jon muses.

The industry and the role have changed, too. Since Jon joined Shanly Homes, he has seen the private housebuilding sector become increasingly integral to the creation of new homes and the system has grown more and more complex. "The planning system continues to become more complicated and this presents all housebuilders and local authorities with a number of challenges. We've seen the tightening of regulation. Some of the more technical changes to planning legislation can be a hindrance to the planning process, and too much red tape can slow this down."

Aside from work commitments, Jon acts as quiz master at the annual Shanly Group quiz night, this year being the seventh. It takes quite a bit of research and time for all involved, but it results in a fun and rewarding experience on the night.

At the age of almost 62, Jon loves his job and enjoys being part of the Shanly team. "There's lots to do, and there's no better team," he says.

"Many of my colleagues I also see as friends, and turnover within the department has been low. Once people join, they seem to stay, and some that have left have come back," he says.

What does the next 25 years hold?

"The planning process, I'm sure, will remain challenging and the continued development of renewables will see the advancement and increased efficiency of our designs and end product," Jon says. "I look forward to both continuing in my role over the next few years and the continued growth and success of the company."