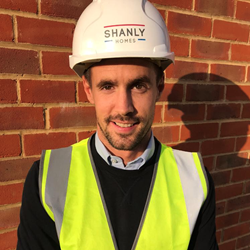 When John Redwood left the army in 2015 aged 25, he was faced with making one of the most important decisions in his life - picking a future career. John had worked as a bricklayer for a few years before joining the army, where he became a communications engineer, and was looking for a new opportunity to leverage his organisational and team work skills.

Having discovered opportunities with Shanly Homes, John joined the company as a trainee, knowing that he would be able to learn on the job and get exposure to housebuilding while working on projects from inception to completion.

John spent the first year and a half working across various sites around Farnham, shadowing more senior colleagues. Having gained exposure to a number of projects, including Cricketers View, Guildford, and Imperial Square, Binfield, he was promoted to assistant site manager and given more responsibility, including helping oversee the construction of Kings Quarter in Binfield.

With those successful projects under his belt, John was promoted to site manager in April 2018, and was given his own site to lead on - Foley Place in Farnham, Shanly Homes' collection of two, three and four-bedroom houses. He spent a year overseeing the site, making sure the project was delivered to a high standard and on time, driven by the desire to create the best product possible for Shanly Homes' customers.

"What I like about working at Shanly Homes is the fact that everyone works as a team, and we all want to do a good job - having this common goal is very motivating", explains John.

"One of the best things about the construction sector is the variety of work and the people-facing element of it - from contractors on a day-to-day basis to customers at a later stage of the project lifecycle. That makes the job social, challenging and exciting, creating the right environment to thrive and grow."

Another thing which attracted John to construction is the room for professional development and progression. John, who has now been in the industry for four years, would ultimately like to become a construction director, responsible for planning and managing all construction activities, and his current job has laid the foundations for that.

John says: "Working in construction comes down to being able to effectively manage and deal with people and projects. Coming from a military background is definitely a huge advantage for anyone thinking of entering the sector, so I would certainly recommend it to all ex-service personnel in search of new challenges."

John has now moved on to his next project, Quinn Lodge in Sutton, a collection of luxury one and two-bedroom apartments, which is expected to launch off-plan in September 2019.

To find out more about Shanly Homes' developments across Surrey, visit www.shanlyhomes.com

We look forward to welcoming you soon.