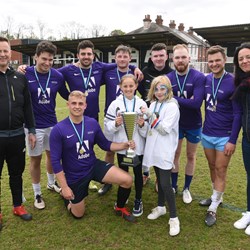 A total of 16 teams, formed of businesses and organisations from in and around Maidenhead, faced off against each other at the five-a-side tournament at Maidenhead United FC's ground on Sunday, vying for the esteemed Anniversary Charity Cup. The tournament, sponsored by the Maidenhead Advertiser and Shanly Group, created an incredible £12,000 for local charities and causes.

Despite playing steadily throughout the morning, unfortunately this wasn't enough for the Shanly Homes and Sorbon Estates teams who, despite their best efforts, were both knocked out at the group stage. The Maidenhead Advertiser team got through to the quarter-finals, however were beaten by Alexander Devine.

In the end, it was Softcat, the Marlow-based IT company, who were victorious in the final, beating Legacy Leisure. Softcat opted to donate their prize fund of £7,000 to mental health charity Mind.

More than 100 players and supporters had a fun day out at the event, with many young spectators getting their faces painted and enjoying the afternoon sun.

"The idea to hold an event that was focused on giving back to the community was at the heart of what both the Advertiser and Shanly Group wanted to do to mark our anniversaries. We do not have the final figures yet but we anticipate that charities will benefit from more than £12,000 that was generated by the event. It was great to see 16 teams from in and around Maidenhead come to York Road and compete for their chosen charity."  Jeremy Spooner, CEO, Maidenhead Advertiser

"The event was a great success. It was fantastic to see so many local businesses coming together and taking part on behalf of their chosen charities. The number of supporters that came along to cheer on the teams was incredible and highlighted the importance of these local community events, particularly those which are in aid of charities and good causes. Well done to all to of the teams that participated!", Tamra Booth, Operations Director, Shanly Group

Photos from the event can be viewed here.