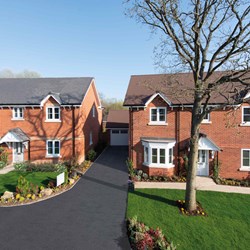 Woking, where our Oaks Meadow development is located, has been named one of the UK's happiest places to live according to the latest figures from the Office for National Statistics.

Confirmed this year as Surrey's happiest place to be, People in Woking are among the happiest in the UK and Woking has also reached peak happiness in the government's official national wellbeing index, scoring an average happiness level of 8.1 out of 10. The UK-wide average was 7.6.

Woking's happiness ranking has been climbing steadily since the index was first launched eight years ago, reaching a record this year and outstripping the majority of towns and cities nationwide.

Cllr David Bittleston, Leader of Woking Borough Council, said the results were a testament to the town's shared energy and ambition: "I am delighted to see that Woking has scored so highly nationally and regionally and that our residents are officially among the UK's happiest. Woking is a forward-looking, ambitious town with a strong community at its heart and which continues to invest in its future. In an excellent location, great spaces, places and events to enjoy, Woking is a fantastic place in which to live, work, visit and invest."

Popular for its wealth of green spaces, Woking has a growing population of more than 100,000 and is a major draw for its strong retail and hospitality offer for hundreds of thousands of visitors. With over 300 shops and more than 30 restaurants, Woking enjoys a vibrant and diverse community.

The town, which is located around 14 miles from Heathrow and just 25 minutes by train to London, is currently nearing the end of a major £540 million transformation.

The government surveyed 150,000 people to determine the results.

Our Oaks Meadow development is located in West End, Woking, and is a luxury collection of 84 two, three and four bedroom houses, with our third phase recently released.

For more information download our brochure, or book an appointment to view our stunning show home online.