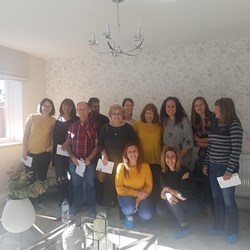 On Tuesday 25th and Wednesday 26th September office-based staff boarded a minibus and set off to visit a number of Shanly Homes sites.

The first stop was Windsor House, Marlow, a converted office building which was once the HMV headquarters.

Just a short drive away was the second stop on the tour, Elva Lodge, Maidenhead, this is a stunning building containing 14 one and two bedroom apartments on the site of an old hotel.

The team then stopped off for a much-needed coffee break at the delightful artisan Bakedd Café in Maidenhead Town Centre and part of our Chapel Wharf development. Bakedd is an independent retailer and unit is let from our commercial arm Sorbon Estates.

The minibus then travelled a little further afield to the fourth stop Great Oaks, Bookham where the team took in the two parts to the development; 33 two, three and four bedroom and a converted apartment block, which was once home 'Photo Me' offices most commonly known for the passport picture photo booths.

After a pit-stop for a lovely pub lunch, the team travelled to the stunning Oaks Meadow development in West End. This site is home to 84 three, four and five bedroom houses in a delightful Surrey setting.

The day was enjoyed by all who attended with lots of feedback to be shared to the various teams.